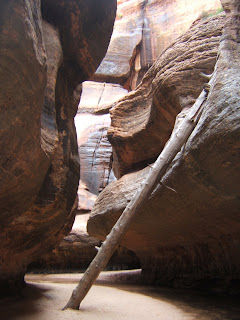 Sorry it has taken me a month to get these Zion blogs out. Our last Zion adventure was a hike called "The Subway." After our trek through the Narrows, our scaling of Angel's Landing, it was hard to believe our third adventure would measure up. In two words, it did. If anything, it was the most exhilarating of them all!
We started before sunrise, dropping our car off at the base of the trail and picking up a shuttle to Wildcat Canyon. Gordon was our driver again. Two other men, retired FBI in their 70s, were hiking the East Rim trim. Gordon said there was another couple he was scheduled to pick up. After waiting ten minutes, a car did show up. They were Germans, and boy did they take their time. The FBI guys were not naturally patient men, and after waiting another fifteen minutes, as the European couple lallygagged, they were past fed up. Gordon stood there, poor man, not knowing what to do. Finally, I went over and figured out what the hang up was. Turns out the couple weren't taking the shuttle. They were kind of freaking out because there was this shuttle of people staring at them! Ha! Poor Gordon was embarrassed. Once he got behind the wheel, he flew. It was terrifying. 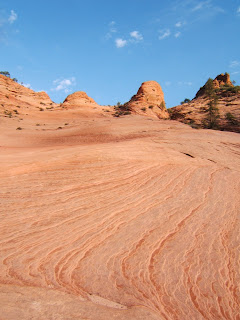 He got us to Wildcat Canyon trailhead in less than ten minutes (he had told us it would take twenty). In a second the FBI and Gordon were gone, and it was pristinely silent. Lia and I were off. In a mile and a half the Subway route veers offtrail and follows a series of poorly laid cairns. Our outfitters told us it was easy to get lost. In fact, one of the guides confessed to us that she had never gotten the trail right. We took their advice to heart and proceeded with caution, following the trail description like it was a treasure map. It really did feel like a treasure hunt. And I'm proud to say that Lia and I never had to double back.
The trail itself is nuts! It eventually leads to a crazy downhill scramble that (having to negotiate it with 25lbs of ropes, harnesses, dry suits, a dry bag of junk) was about at my limit of ability. Lia had little difficulty. Once we reached the bottom we hiked to our first "obstacle." A thirty foot angled rappel. It wasn't too bad (though it had the added pressure of being the first rappel of Lia's life!). She did awesome. From there, we had to swim through a series of frigid, narrow, deep pools, the longest about 50 ft around a bend until we reached our second rappel. It was beyond awesome. 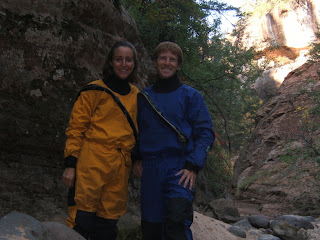 We had been forewarned of the iciness of the water and had rented, along with our handy-dandy canyoneering boots, "dry suits" which are basically old costumes from the television series of Star Trek. Unbelievably, they work! 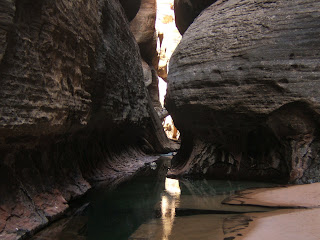 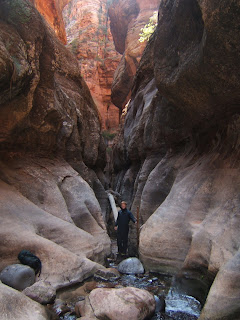 The adventure got better and better. Each rappel was more sweet than the last. The scenery was beyond description. Our third rappel was at Key Hole Falls (I'm pictured above it); it was a waterfall rappel into water, which led into the actual "Subway" section. It's called the "Subway" because for some reason the water had chiseled out a perfect horizontal cylinder out of the canyon wall. I wish our camera could better capture it. You'll just have to go. 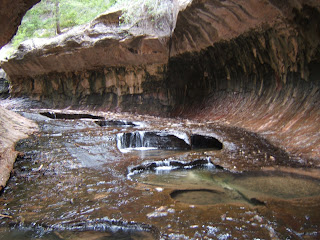 The only bummer was that there was no one around. No one was there to witness Lia's rock star talents. But then, as I clipped her into the final rappel, seven people showed up! They were "bottom-uppers" who had hiked to this point, just in time to watch Lia rappel angelically down from the sky! It was the third, and best, rock start moment in three days! Ha! 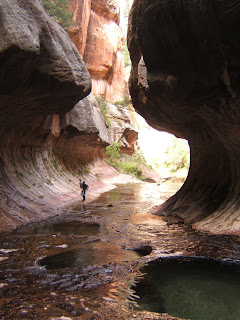 Posted by Ned Erickson at 11:51 AM No comments: 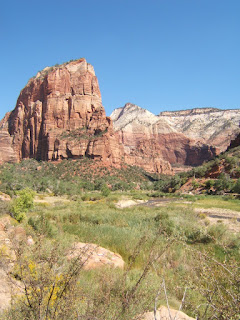 We woke up from camping to a windy and chilly world. It was hard to believe that it was over 90 degrees the day before and would be 90 degrees again later that day. I was wearing all my clothes and trying to get my camp stove started to percolate some coffee.
Of all the adventures we had planned to endeavor, Angels Landing was the one Lia was most freaked out about. "It really is not that bad," I told her. I had done the hike a couple years ago with my friend Tim. "The trail is never narrower than a sidewalk. So what if there are 1,000 foot drops on both sides. Besides, they put in chains for you to hang from."
She didn't seem to be soothed.
We broke camp and headed over to the shuttle, which took us to the grotto stop; we then crossed the river (by bridge this time) and started up the trail. Angels Landing is five or six miles total. An elevation gain of about 1,600 feet. It is paved most of the way, snaking up marvelously from the canyon floor. One section is called Walter's Wiggle! 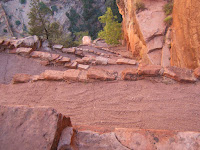 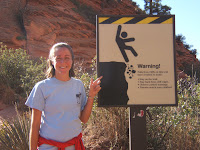 Reaching the ridge, we passed the point where most people cash it in. Lia bravely showcased the sign before heading on. She was a champ. Other than the moment when I pointed out the view on our left, and she quickly instructed me that she had no interest whatsoever in taking in any views beautiful or not until she was safely sitting on top - I couldn't tell at all that she was scared. Uncharacteristically, I kept my mouth shut and snapped some photos so that Lia could see later what she missed. 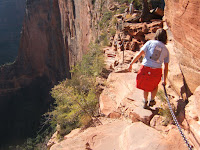 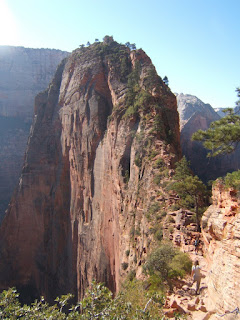 The only other time I noticed that she was the slightest bit nervous was when we did get to the top she sat smack down in the middle of this group of people, as if to say, "If I'm going down, you're going down with me." Eventually, she realized the ground underneath her was secure, and she began enjoying herself. The view truly is spectacular. 360 degrees of canyon.
Surprisingly, Lia flew down. I couldn't keep up. It was like conquering the summit conquered something inside her. It lifted her anxiety completely. I finally caught her just as we were getting to the spot most people stop, just in time to witness her second rock star moment of the trip. People were ooing and aahing. One lady innocently asked if she was pregnant. Lia nodded. "20 weeks," I added. Folks were seriously impressed. So was I. 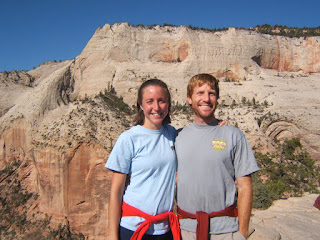 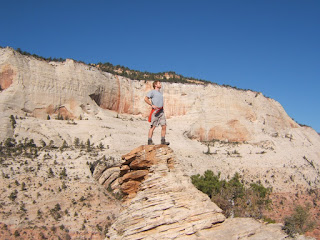 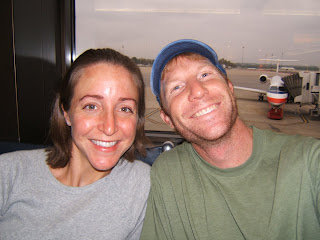 Last week, Lia and I embarked on an incredible adventure. We traveled to the Southwest corner of Utah and spent a week exploring Zion and Bryce Canyon National Parks. It was a long anticipated vacation; we hadn't spent a week, just the two of us, since the summer after our first year of marriage (August 2001). We were overdue. Especially considering the fact that Lia is due again in February with a boy! This trip was our "Baby Moon" or "Moon Baby" according to Lia who said she read the term in a book: a vacation one takes before the birth of a child. Needless to say, we were excited, excited and anxious - we (or I) had planned an action-rich week, one that would stretch and challenge and hopefully provide a few memorable experiences of the positive variety. Our expectations were high and, as it turned out, exceeded in every way. The following series of entries will be a snapshot chronicle of the adventure...

Adventure 1 was a two day hike through "The Narrows," the world's longest slot canyon, 16 miles top to bottom, my sources tell me. Gordon was our shuttleman. I stiffed him on the tip because I left my wallet in the car. Fortunately, he was our shuttleman for our 3rd adventure so I got to make it up to him. 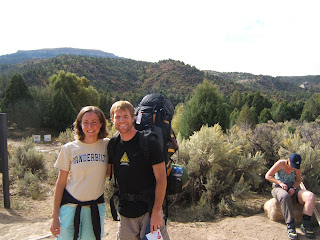 As it turned out, The Narrows thru-hike was a perfect introduction to Zion National Park. We began in this field of wild flowers, a tiny stream serving as our sole trail description. It was hard to imagine such a small thing could cut a 1,000 foot trench into the earth. Soon enough there was nothing to imagine - the proof was chiseled almost out of sight on both sides of us. 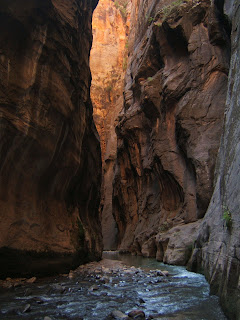 We ate lunch on some slickrock outcroppings. Tuna-bagel sandwich. Lesson learned: don't pack tuna. We had bought "family size" (it should have been called "small army size"). It served as lunch and dinner. And it's a good thing that we were not in bear country because it stunk! We would have been goners for sure.

We spent half the time wading. If the water wasn't so low, we would have waded even more. We crossed that river so many times I wouldn't have been able to keep count. The trail continued to grow "narrower." Soon we were completely bracketed by impossibly high cliffs. I think I said "woah" more times in these two days than on all others combined. 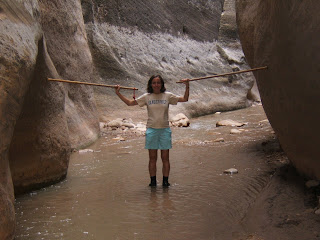 We found our campsite around 5pm. It was already beginning to get dark. We set up camp, ate dinner, and enjoyed the last bit of light down by the river. We had quite a laugh at the expense of my feet. Peeling off the canyoneering boots and neoprene socks we had rented, I was introduced to one of the most frightening sights of my life. My skin was this crazy stale purple color, and it hung hideously in wrinkles from my bones. It reminded me of Emperor Palpatine's skin in Star Wars, at least what I imagine his feet looking like based on his face. 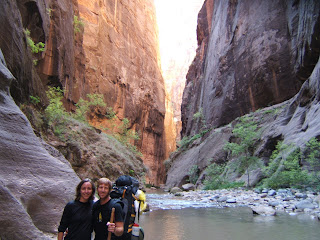 We were fast asleep by 8pm. The next morning we ate peanut butter bagels (much better than tuna, though Lia had been a bit (way) extreme in her apportioning) and lamented the lack of coffee. We had decided not to bring my peculator on the two day hike because we didn't want to have to take dumps (they give you these foily bags to poop in and make you carry it out). However, our plans were spoiled by gastro-colic reflex from the humongous glops of peanut butter. The poop bags worked great until one exploded as I was cinching it down to my pack. Still things were ok. I simply put one bag in the other, and it was fine, until the second exploded when, while I was wading, chest high, I slipped, throwing my bag to safety but having it land directly down on poop bag two. I'm pretty sure people could smell us before they saw us. 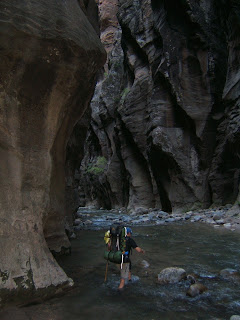 Speaking of people, the first day, we saw a grand total of three. The next, we didn't see any until about 11am or so when the bottom-uppers began trickling upstream. Frankly, it was kind of weird seeing them. We had grown accustomed to having the canyon to ourselves.

What a beginning! What a blast! And amazingly we came out unscathed. Lia did have one plunge, but the pool was so deep she didn't hit any rocks; only her wrist (and the camera she was holding) remained dry. 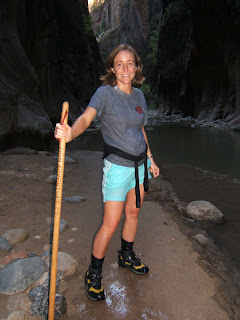 Adventure 1 compete. If it had been the only thing we did all week, it would have been well worth the trip...but there was much more to come...(by the way, to give you some perspective, in the picture below, you can just barely see me, climbing the bottom of the rock!) 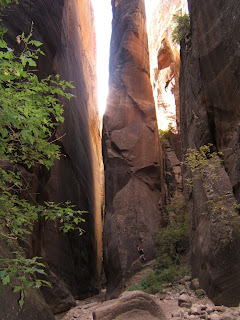 Posted by Ned Erickson at 11:00 AM No comments: