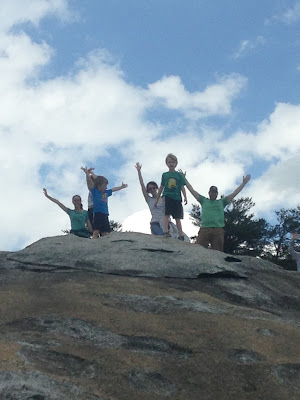 Last Saturday, the family and some friends went to Stone Mountain State Park (North Carolina not Georgia). It is a beautiful place with trails and waterfalls. The highlight, you discover, is the mountain itself. Standing on top of it, you feel like you are standing on the moon. The granite goes on forever, smooth as the hood of a car, until you look at it close or rub your hand on it and feel the sandpaper threaten to rip off your fingerprints. 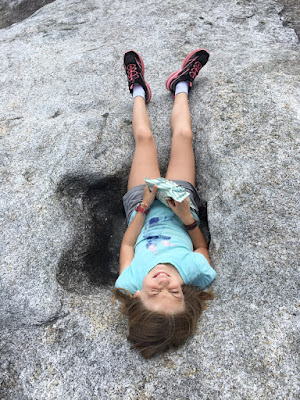 We love Stone Mountain. The hike is about two miles to the top, two miles back down. We have a picture at our house of these friends of ours and us, lying on our bellies on top, pretending that we are hanging on for dear life. Our dog Chelsea is licking the sweat off my face.

Chelsea is no longer with us. And these friends, who now live in Charleston, have kids who had never been to this mountain before. So last Saturday we hiked to the top and imagined walking on the moon while we ate granola bars on the sandpaper rock. We took a picture on our bellies, no dogs this time, but kids. There were no kids back then. Now there are five between us. 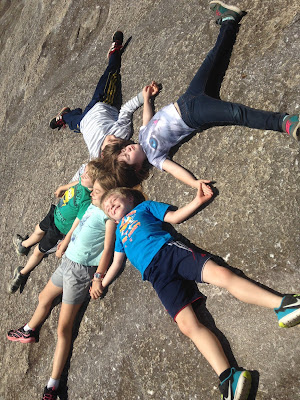 That made nine of us total, so we had split into two cars, dividing by gender just for fun. Lia drove our car. She put the keys in her back pocket. She hooked them around the loop of her jeans while we were on top, eating our granola while sitting on the sandpaper. She didn’t realize that the key to our car was missing until we were back down the mountain.

I keep my keys on a carabiner. It’s what you do when you have lots of keys (the cost of having more than one office). My car key I had separated from the rest because (and for those of you who have children you understand this) about once a week one of us forgets something back at the house, and we have to turn around to get it, and it is a pain to turn the car on and off. So only one key was missing, the key that started the car.

We looked everywhere for it – the car, the parking lot, the bathroom, the grass by the bathroom. We discussed whether the eight of them should hop in the other car while I hiked back up the mountain to the moon rock where Lia assumed the key must have come off when she relocated the carabiner from her back pocket to the loop in her jeans. We contemplated driving home all nine of us to get the spare key. We were in the midst of contemplation when we were interrupted.

The man was huge. His thick arms darkened with dirt. His maroon shirt stretched like a rubber band on his two-hundred-sixty-plus frame. His face hid behind a porcupine of a beard.

It’s the kind of thing huge, two-hundred sixty-five plus pounder men with porcupines for beards say – or angels.

Angels say don’t be afraid, too.

He dangled a single GMC Acadia key in his muscular fingers like a carrot in front of a donkey. He handed the key to my wife like a grandfather placing a Werthers butterscotch in the hand of a child – like a priest handing a parishioner the body of Jesus.

My friend asked him his name.

Bruno. Of course it would be a name like Bruno.

My friend asked if he could touch him to make sure he was real. His finger made a dimple in Bruno’s thigh-sized bicep. Bruno walked back to his maroon pick-up.

We waved to him as we drove away in the two cars we came in. Bruno waved back from his leaning against the tailgate of his truck parked in a handicap spot. We turned the corner and headed out of the parking lot. I didn’t check the mirror to see if Bruno was still there or if he had vanished back to heaven where he came from. 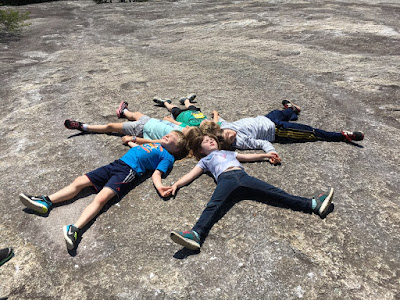 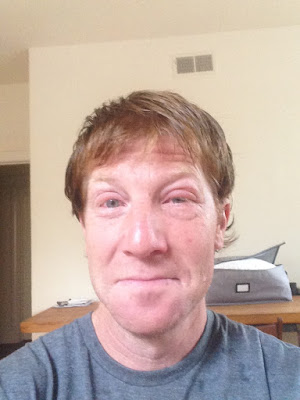 So two days after I returned from Harry Potter World, I woke up to my eyes glued shut! I think I remember something like this happening to Ron Weasley at one point. I thought about taking a Sharpee and writing on a t-shirt: "I took my daughter to Harry Potter World and All I Got Was Pink Eye."

The worst part of it was that I was supposed to go to a National Fellows Conference that afternoon in Washington D.C. I made some calls and the doctors I talked to said I'd probably be fine by that evening. So one called me in some eyedrops and I proceeded up to D.C.

My eyes were not better by that evening. There was yellow goop getting in the way of my eyeballs which made driving through D.C. traffic way more exciting than usual. To make it worse - Prince died. Which was totally sad, but when you are in a car for six hours, there is only so many times you can hear Purple Rain before you go nuts.

I spent the night with my friend Nathan, who lives on Columbia Avenue right downtown. There is an awesome roof on his apartment building, the kind that allows you to see the whole city. We grabbed a few drinks and headed up the elevator. It was one of those misty nights, or maybe it wasn't - it actually really could have been my eyes. Everything was blurry.

In a few minutes, we were joined by several others who decided the roof was the only appropriate place to mourn the death of Prince. One woman in particular, a French woman, just a few years younger than Prince, was falling to pieces. I consoled her the best I could. She played for me her favorite Prince song(s). I told her that Prince left the world a gift by recording songs that we can listen to for the rest of our lives.

My friend and I finished our drinks as we sat and talked beneath the misty full moon above our Nation's Capital. A night I will not soon forget.

My eyes were worse the next morning. It wasn't going to be fun, but I knew that I had to go home. I couldn't look myself in the mirror (literally, I couldn't) knowing that I could potentially infect the entire Fellows Nation with Pink Eye.

It was a long drive home.

And the eye business didn't resolve itself for several more days - including an uncomfortable morning at church where I led worship and the prayers of the people.

It made me feel for those of us in this world with visible maladies. That was a hard part - the being looked at. Then there was the lack of physical touch - that was even harder. I didn't touch a human for nearly a week. It was awful.

It has grown my compassion.

For those of us in this world that need a loving touch.

I think of Jesus reaching out his hand and touching the leper.

I am thinking how we are called to be the hands of Jesus.