Be Careful What You Ask For

My office is on the second floor of the Forsyth County Young Life house. It is a huge gift, and the price is right. And hopefully for them (and me) the investment will pay off with a large donation as my novels rise the New York Times Bestseller List.
Until that day, I try to show my appreciation in little ways: replenish the coffee supply, carry the recycling to the alley, replace the toilet paper... Likely, office administrator Sallie Harrison was expecting nothing when she asked if I would be "entertainment" for her quarterly meeting of local volunteer coordinators (PRAVA - I think it is an acronym). That of course is where she went wrong. She should have learned by now, but one must never give Ned the opportunity to stand up in front of a group of people unless one really wants Ned to stand up in front of a group of people. 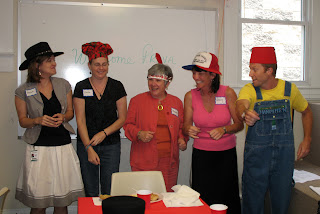 A week later, I show up in the middle of the meeting as "Fez", the Argenswaillen party-starter. (Sallie is the one in the chef hat.)
Posted by Ned Erickson at 11:29 AM 2 comments: 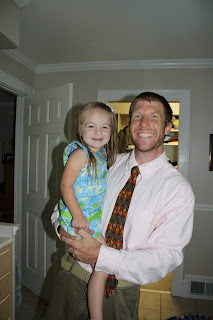 New friend and Chik-fil-a franchise owner, Raphael McCloud, put on a daddy daughter date at his restaurant on Knollwood in Thruway Shopping Center. I called earlier in the week to make reservations. A-Ro wore this shell ensemble; I put on my violin tie (once my only tie!). We entered hand-in-hand, were greeted by the cow (which shot A-Ro up into my arms!), and were ushered first to have our picture taken then to have a seat.

Linen table clothes. Rose petals. A harpist in the background. (We're in a Chik-fil-a!) A server came to take our drink orders. Milk and a lemonade. She returned for our orders. Kids meal and a #1. I t A-Ro told the story about the time I hit a golf ball at a perfect ninety-degree angle straight into a pasture and hit a cow on the tail. (I embellished a bit. There was no cow, but it was into a pasture at a perfect ninety degrees!). I also told her about my first birdie. A par 3. I had skulled my tee shot about 30 yards and worm-burned my second shot straight into the cup from about 100 yards out (no embellishment needed). She told me the story about this dried-up worm she found on the driveway. "I touched it. It was dead," she said. She told me her favorite color was dark pink. I said one of my favorites was the shade of her eyes. "Brown?" she asked. "Just like your eyes," I said. She batted them and blushed. I had never seen her do that before.

We ate our meals. A-Ro ate a sickening amount of waffle fries. The waitress brought out a sampling of desserts to choose from. A-Ro picked cheesecake with chocolate drizzle. (We're at a Chik-fil-a!). It came out in a to-go box, but we ate it in the store. They handed A-Ro a card and a carnation, me the bill for 10 bucks. It was then that I realized I had forgotten my wallet.

Nothing like dining and dashing on a first date...! 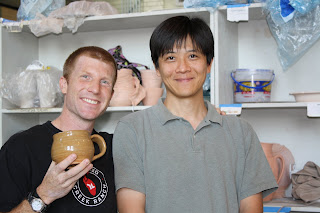 Take a look at this mug. The ceramic one. I made that. I made it with my own hands.

This spring, I decided to begin research on a book that has been percolating my insides the last six months or so. It's a story about Clay. He's clay. The main character. He is made of clay. His name is, too. Clay. The main character's name is Clay. Which makes it both convenient and confusing at the same time.

So I decided to see what it was like to work with clay. I took a beginning pottery class at the Sawtooth Center here in Winston-Salem. The first thing I learned is that there was a lot to. Learn. There is a lot to learn. At least three-quarters of the class had been taking beginning pottery for years.

Our instructor, Po-Wen Liu, and I as it turned out had much in common. Not our wheelthrowing abilities. He is a master. I am and will likely remain a young grasshopper. But we both have two children. And when it comes to parenting them we are on even ground. Neither of us know what we are doing.

About four sessions in, Po-Wen asked me what I was doing there. It took me awhile to understand he wasn't talking about the mess I was making. He was wondering why I was taking pottery. Looking around at my fellow throwers, I guess it would make one wonder. Most were retired. The others, but one, had previous experience. The one was a student at North Carolina State who had taken a semester off and had time to spare. Then, there was me.

I thought about making something up, but I have been on this no lying kick lately, so I told him. "I want to write a book about clay, and I am planning on befriending you so you will want to help me write it." He said, "Ok."

He told me that a few years ago he was the consultant on the Newberry Medal winning book A Single Shard by Linda Sue Park. It had been a great experience for him, and he said he would be thrilled to have another. I said, "Ok."

How about that for serendipity?

We had our last class yesterday. I think I am going to take a second beginning class in the fall. Over the summer, Po-Wen and I are going to 'work out' at his studio in Greensboro.

The mug you see in the picture is my wife's Mother's Day present. I am so proud of it, it was hard to give it to her. Ha! But she loves it, too. She has been drinking her morning coffee out of it for a week now. The mug I made for myself should not be pictured. It is all handle, and it doesn't hold enough coffee. The handle isn't the problem. I don't mind handles being big. I just wish the rest of it was. I'm a big mug kind of guy. I don't like refills.
Posted by Ned Erickson at 6:14 AM 1 comment: