We are off and running with our fourth cohort of Winston-Salem Fellows! At 11am, these for the most part strangers pulled into our driveway and met each other for the first time.

We went around the circle introducing ourselves to each other. I asked them to also share one word that described how they were feeling at the moment as well as a piece of trivia.

Words like: "Uncertain, Apprehensive, Excited, Ready" came off their lips. To be honest, I felt all the same words!

From there, we went down town to the 500 W. 5th Building for a Welcome Lunch.

We reintroduced ourselves and were welcomed by Board Members and Steve Lineberger of Winston-Starts.

After lunch, we changed clothes and drove about an hour down the road to Lake Norman for our Orientation Advance.


Over the course of the next few days, we got to know each other, we worshipped, prayed, studied, discussed our summer reading, went over every word of the Handbook...

as well as played, swam, worked on the hardest puzzle ever, and cried because we were laughing so hard...

It is always amazing to me to watch community happen.

Saturday, we finished up at the lake and heading back to Winston-Salem. The temperature dropped over twenty degrees! Thank you to Flow - we were given the opportunity to attend the finals of the Winsotn-Salem Open.

On Sunday, the Fellows went to churches and were introduced to folks around the city. This morning, they are heading to their first days at work!

Talk about a whole lot of new things all at once!

This is the third year in a row that we have been blessed with a last minute addition. Brianne to many of you is not a stranger. She is the daughter of Eddie and Michelle of River Birch Lodge fame.

Brianne is coming off a year of working in the Czech Republic with Campus Crusade and when her future plans shifted, she fell right where I believe she is supposed to be.

We met Friday. We interviewed her Tuesday. We offered her a spot that same day. She came to Orientation on Wednesday. And we are interviewing for a job tomorrow!

Even though she is a Winston native, we still will like to land her a Host Family. Let me know if you are interested. She is a gem!

Heather “Hef” Turner grew up in southwestern Virginia. She attended Gardner-Webb University, outside of Shelby, North Carolina. In the fall after graduation, she accepted a position on Young Life staff in Shelby where she served in several positions over the next six years.
In 2015, Hef and her husband, CT, as well as their new daughter, Reese, moved to CT’s hometown of Winston-Salem. During this time, Hef stepped away from the workforce to be at home with Reese and their second daughter, Miller Jane, who was born in 2016. In the fall of 2017, she began to work virtually with a branding and web design agency based out of Nashville, TN. Since her time in Winston-Salem, Hef has enjoyed participating in the Imago Dei Ministries and has recently joined the leadership team.

When not playing “princesses” with her daughters, Hef enjoys being physically active as well as a strong cup of coffee! She is honored and humbled to be a part of the Winston-Salem Fellows.

We are going to need your support this year! If you have given in the past, please consider continuing or increasing your investment this year. If you have not, this is the time!

We are taking this thing to the next level, but we can't do it without your generosity.

consider clicking on the give monthly option.

As always, thank you! Part of taking this thing to the next level is celebrating our donors - we want to bless you this year! So come on! Join the team!

Monday: UPDATE writing, a heap of administrative work, meeting with my mentor, and a good old fashioned cook out at the Ericksons for Round Table
Tuesday: GOYBADS, Rotary, and Employer Drop In Day
Wednesday: Leadership Winston-Salem Meeting, Leader Lunch with NIGEL ALSTON. Why not start off with a BANG! First Field Hockey Game! and a Mentor Planning Session
Thursday: Planning Day
Friday: Excursion to Hanging Rock, Priddy's General Store and the Wake Football Game!

Our program starts earlier than the other programs across the country. So keep the others in your prayers as they start up in the next couple weeks.

We are still landing a few planes like Brianne's job and host family.

We are also still trying to sell our 381 Dover Dr. House. If you know of a family moving into the area - do we have a deal for you!

Thanks y'all. Keep sharing the story and spreading the love! 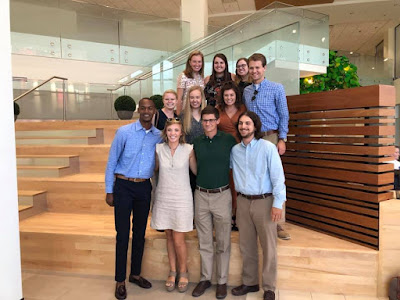 It's looking to be another great year!


Posted by Ned Erickson at 7:26 AM No comments:

THE CALM BEFORE THE STORM?

THE STORM BEFORE THE RAINBOW?

Well. Ready or not - here they come!

Our Class of 2020 will be arriving this Wednesday to launch our 4th Winston-Salem Fellows Cohort!

Here's a look at this year's class:

On Wednesday, these ten individuals will be arriving to Winston-Salem to begin one of the wildest adventures of their lives. I cannot wait to introduce them to each other - AND TO YOU!

This week, the Fellows Board enthusiastically extended an invitation to Heather (Hef) Turner to accept the role of Assistant Director. AND SHE SAID YES!

More on Hef to come in upcoming Updates, but I couldn't wait to share the great news.

We had several amazing candidates. Thank you to all of you who expressed interest in this position. It was humbling as the director to see so much talent come our way. I say this a lot - but we have an embarrassment of talent in this city. What a gift!

WHAT A FUN VISIT!

Officer Christina Sandstedt of the United States Coast Guard came by for the weekend to catch up with old friends. (Christina was a Fellow our inaugural year). She is coming off a six month assignment to the East China Sea and has just finished "Boarding School."

(If you all saw that video of the Coast Guards Boarding the drug submarine a few months back - that is what Christina is now trained to do!

What a gift it was to spend the weekend with her. It was extra cool that she got to connect with other first year Fellows, including Campbell Anderson - at Pepsi - Dakota Lee - starting RUF at Wake, and Sean Henderson who came up from Charlotte to spend the evening/night with us!

A BIG ITEM FOR PRAYER

We have had not one, but TWO contracts fall through on our 381 Dover Dr. House in the last month. So after thinking that we had finally found the right family TWICE we are back to square one. Ugh!

Please pray that a wonderful family falls in love with our home. It is ready to move in! And we are ready to sell!

Last winter, my father-in-law and I started scheming together to start a new tradition - a man trip for the four sons (three are sons-in-law) and the three boy grandchildren.

This summer, this week, we pulled it off with a trip to Pigeon Forge and a hike to Mount LeConte Lodge!

We've got another mouth to feed with bringing on Hef Turner - she is worth more than every penny we can offer her! But we will need your help with those pennies!

So please think about supporting us financially.

online:
wsfellows.com/give
consider clicking on the give monthly option!

As always - thank you! We so appreciate our donors.

Summer UPDATES pale in comparison to Program UPDATES - so next week's UPDATE is going to be pretty exciting!


Posted by Ned Erickson at 7:37 AM No comments: