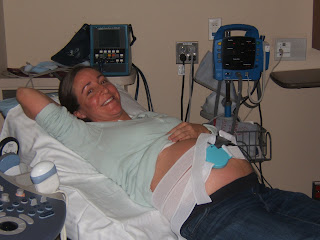 Today, we attempted a thing called "version." For several weeks now I have thought the procedure was called "aversion" (which is how I was feeling toward the whole thing), but I was wrong. I had also made the mistake of asking Lia if I had to be there. She didn't answer, which means "yes" or "only if you want to live" or "it's your fault I'm in this mess in the first place" - one of those.

And I know I wasn't the one going through the thing, but honestly the hardest part was the wait. We waited so much we were waiting to wait. It was awful. By ten in the morning I had restless body syndrome, and I was starving. To make matters worse, I had packed some granola bars. They were sitting there, staring up at me from my backpack. The problem was Lia hadn't eaten all day. I had eaten a big breakfast, drank three cups of coffee, and was munching gum. I had no right to eat in front of her. Ultimately, the only purpose the granola bars served (and I had been so proud of myself to think of packing them) was to remind Lia and I how hungry we were.

Then came the version. So they goop up Lia. The whole bottle...spread out like a tic-tac-toe board gone ballistic. Then they give Lia this shot. Or wait, they give her the shot and then goop her up, I can't remember. But the shot is to stop the baby from popping out. (It works. The baby is still stuck.) The only side effect is that it made Lia feel like she had just chugged a venti from Starbucks on an empty stomach. I never heard Lia talk so fast. Back to the "a"version. They had two doctors on her. One "lifting" the babe off Lia's pelvis while the other using her hands like a jai alai stick (mallet? I don't know). They got the kid sideways (transverse in doctor lingo), but as they guided him around the final bend he jumped back to square one. So they tried a second time but the kid's heart rate started going wonky (decel in doctor lingo). So they gave up.

I guess it is back to square one for us, too. We'll schedule a C-section for a week and a half from now. The poor kid must have inherited his daddy's hind quarters. The heaviest part always points down. All in all, we're fine. The babe is fine. Stuck but fine. Lia is fine. Sore but fine. We're both a bit disappointed. But we are also at peace that we did the right thing. It was worth a shot. What can you do? When you're kid's stuck, he's stuck.
Posted by Ned Erickson at 3:24 PM No comments:

The Boy is Stuck 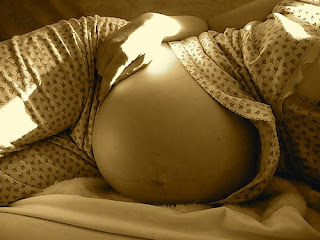 Not much news to report, other than Lia is finishing up her sixth book in as many days. And these are real books, thick ones.

Wait that's seven! Talk about time on your tush. Needless to say, we're feeling a little antsy around here. 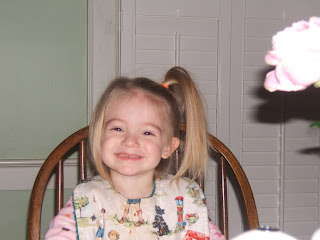 Poor A-Ro is sporting off-kilter hairdos (see picture). Daddy is kind of stinky. Lia is fighting restless leg syndrome. The dog has skipped a few meals. But so far, we're not too worse for wear. Keep the support rolling!
Posted by Ned Erickson at 6:52 PM 1 comment: 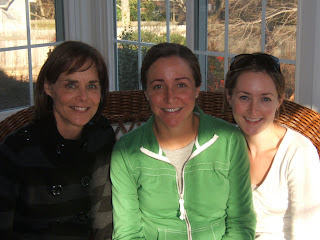 Lia's mom (Sue), sister (Cara), and niece (Evy) have arrived to help around the house. They have already prevented me from making their beds. This is going to be great, if only for the weekend.

We have made it a week labor-(the pregnancy kind)-free. Monday, Lia had some painful contractions which sent me into near cardiac arrest, but they eventually subsided (as well as my anxiety, eventually). As for Lia's rash, good news on that front as well. The last few days have been the best that they have been in seven weeks! Keep up the praying. It's working.
Yesterday, Anna Rose picked up Lia's cellphone and said she was calling baby brother to tell him to come out. I told her to tell him to wait a bit longer. She told him. I asked her to ask him when he was planning on coming out. She said he said Sunday. I asked her was it this Sunday or next Sunday? She said next Sunday. I wouldn't mind if it was next next Sunday. We'll just have to see.
Posted by Ned Erickson at 12:56 PM No comments:

Many of you know that the last trimester of Lia's first pregnancy was dominated by the onset of this crazy rash. Doctors never found a cause or a cure. But we have learned that it must have something to do with pregnancy because it is back. Poor Lia. I feel like she is the reincarnation of Job.

(She won't let me take a picture) but if you google "urticaria" there are some pretty accurate portrayals of what Lia's looks like. This time they showed up around Thanksgiving but fortunately til now she has been able to battle them off with a drug concoction of Zyrtec and Zantac. For some reason however since Lia has returned from the hospital the rash has attacked with a vengeance. The normal weapons aren't working. So please, send up a prayer for her.

Otherwise, we're doing ok. Anna Rose is hanging in there. Our house is a little messier than usual; I'm a little more tired. But we're surviving. Thanks for the food, the company, the phone calls, and the prayers. At midnight tonight, Ned Jr. will be 34 weeks, which is a milestone I am told.
Posted by Ned Erickson at 11:02 AM No comments: 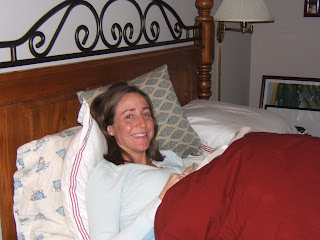 Lia went into the doctor early Tuesday morning for a last minute checkup to see if it would be ok to fly and spend the week with family in Disney World over New Years. All systems checked out. I went to work. Lia started on final preparations. Our plane was leaving at 8:55am Wednesday from Raleigh. I got a call around 11am. Lia told me she was on the floor in our bathroom, having just graced our toilet with breakfast and lunch.

I rushed home. Lia went to bed. She continued to be sick. About 6pm, she started having contractions. About 7pm they were about 4-5 minutes apart. She was so dehydrated she could barely talk, but she managed to tell me that we needed to go to the hospital. I called our friend Paul, who had just had his second child, and asked him if he wouldn't mind coming over to sleep at our house with A-Ro while Lia and I went to the doctor. He was here in 10 minutes. The thought of having quiet uninterrupted sleep was too good to pass up. Plus he is a wonderful friend.
And hour of waiting to be seen...and we were still sixth in line. It was a popular night, it seemed to have a child (tomorrow was New Year's Eve). I finally did something I normally don't do. I went to the check in lady, told her that my wife was about to pass out if something wasn't done immediately. She asked if I wanted ice chips. I said I want her on an IV in five minutes! Yikes! Who was that guy? Believe it or not. It worked. We were ushered in. Lia was so dehydrated it took them three tries to find a vein. She drained three full IV bags before she peeed!
The OB was a friend, which was nice. She was very thorough. And concerned. No Disney trip. From her check up that morning, Lia had dilated 1 cm. An hour later she was 2 cms. They put her on this crazy magnesium sulfate muscle spasm sedation drug. It wasn't working. Lia was having contractions 2-3 minutes apart. By 2am, she was 3cms. The baby was breach. We had to sign all of these forms. Everything was pointing toward emergency C-section. They upped the dosage to maximum potency as a last ditch effort. Finally, things started settling down.
She was on the magnesium the next 24 hours as they gave her some steroids among other things (mostly stuff for the baby). She had at least three tubes dripping a variety of fluids in her. Anna Rose handled it ok. I brought her in to see Lia Wednesday morning. I began sending out prayer updates.
We were overwhelmed with the response. Wow! Thanks. And I'm excited to tell you that your prayers have been answered. After three days, Lia is now home. She has been sentenced to bed rest for the rest of her pregnancy, but the doctor this morning seemed optimistic that Ned Jr. (it won't really be ned jr.) has a good chance of staying in Lia's belly a few more weeks!
Many of you have shared with us similar stories of premature labor, premature birth, etc. They have been very encouraging. I don't know what Jr.'s story will be. But it is very comforting to know that we are not alone in this. Thank you also for your offers of food, help with Anna Rose, etc. The answer is Yes! and often!
For the sake of ease and so I do not flood your inboxes, I'm going to switch email updates over to my blog. Hope that doesn't inconvenience anyone. I'll do my best to update this every few days, or as things change.
It might seem odd that I called this blog New Year Celebration. It was the strangest of New Year's Eves. Lia was hooked up to tubes in the hospital. I was at home with Winnie and A-Ro. Neither of us had slept more than a few hours in two days and was well into REM by the time the Apple fell. But I'll tell you, going through this has re-reminded Lia and I of how blessed we are. Sure, we are not in Disney World. But we live in a town, in a country, with so many people who clearly care about us. We have felt incredibly loved. Thank you. Happy New Year! Please know, we love you, too.
Posted by Ned Erickson at 11:44 AM 2 comments: