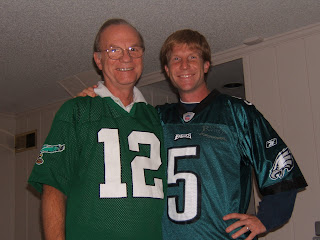 I have spent the last couple weeks analyzing the complete transformation that has taken place in my psyche ever since Brad Lidge threw that slider in the top of the ninth to seal the World Series for the Philadelphia Phillies.
I have been a Phillies fan since I can remember. I lost my first tooth at a Phils/Mets game. I went to dozens of games after I got my license. Heck, when they tore down the Vet, me and my friends went down and "purchased" some seats. I have two mounted in my basement.
Really, like most Philadelphians, I'm not just a Phillies fan; I'm a Philadelphia sports fan. I care. I care deeply. My dad started me early. I was actually born on September 24th because he and the doctor were rapt by the television set, watching the Eagles beat the Cowboys on Monday Night Football (13-10). We went 7-7 that year, second to last in our division.
And so the years go round: the Flyers and Sixers seasons into the Phillies, all the way through the Eagles. And I realize we, Philadelphians, are not the only ones accustomed to losing. There are planty of other towns, cities, regions that have gone on similar if not longer droughts than the one we in Philadelphia just weathered. And I don't want to assume to speak for you, but at least for us who grew up in Philadelphia, losing has done some serious things to our minds, hearts, and souls.
To name a few: (1) Philadelphians hate New York teams. Not New Yorkers, just New York teams. We don't hate the people of New York, that is unless they are rooting. Then, we hate them. The thing is, we won't admit this, we have too much pride, but Philadelphia, let's face it, really can't compete with its neighbor to the north. We have such an inferiority complex it isn't funny.
(2) Philadelphians really believe in Murphy's Law. I know I do. Sooner or later something bad is going to happen. You hope this year will be different, but deep down you have little confidence that anything but disappoint will be waiting for you at the end of the season. If there is a way to lose, Philadelphia will find it. No matter how good the Eagles look games 1-16, their last game will be a loss. We were up 3 games to 1 this year in the World Series, and there was no Philadelphian who was 100% confident we were going to pull it off. If Tampa Bay couldn't stop us, the weather would. I was still sweating it two outs in the ninth with an 0-2 count. Again, this belief has its non-sport connotation. I, personally, never expect things to work out the way I want them to. If something good happens to me, I'm keeping an eye out to see where the next shoe will drop. There is always a dark lining around every silver lining. It's just the way we Philadelphians see it.
(3) Philadelphians simultaneously embrace/despise their Sysiphisian role. When the Phillies lost their 10,000th game last year, becoming the first team in history to eclipse the fifth digit, we cheered. There is a part of us that loves getting beat. We are so hard core crazy about our teams, and we hang our hopes on them every preseason even though deep down we know it is only going to end in pain. Ben Franklin coined the saying: "Insanity is doing the same thing twice and expecting different results." Only a Philadelphian could come up with that. We have made insanity an art. Philadelphia is the real Washington Generals. We are there for others entertainment. And it is kind of funny. I mean, we're there. But man do we hate it. That is why we boo. It is not because we are mean-spirited. It isn't really the players or the opposing players or the coaches or the refs or Santa or the owners or the GMs or anybody in particular (sometimes it is) but really it is our role. We are men and women accustomed to losing, and we hate it. We want to win so bad we would do anything for the cause. I have put some thought to it (really, I have): I would have seriously given an arm if it would have helped the Phillies win. Fortunately, they didn't need it. But I would have done it. I would still do it for the Eagles. I would do anything for a victory. During the final post game press conference, a reporter asked Charlie Manuel how he felt; he said, "I feel like a winner." Cole Hamels said the same thing. We want to be winners. We are tired of losing. That's why we boo.
But somehow, some way, this time, we won! And now, at least for now, everything has changed - my whole psyche. My inferiority complex, gone! And Murphy's Law, you have been amended: whatever can go wrong, will, but not always. Sometimes even Philadelphia wins. 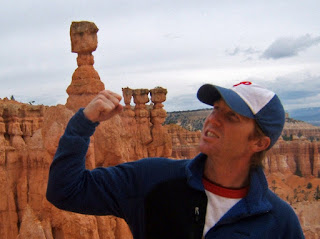 Posted by Ned Erickson at 12:31 PM No comments: 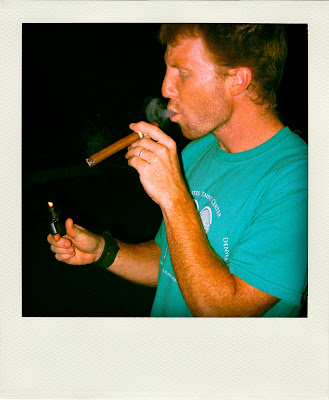 I don't like to smoke. I didn't even enjoy this particular cigar. But man do I look cool.
(photo by Bobby Milam)
Posted by Ned Erickson at 10:06 AM No comments: