A Dream I Dreamt Last Night 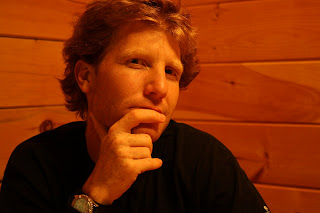 I was in a car, a roadster, with my mother in-law Sue. She was telling me about this poem that Caitlin's friend Evelyn wrote about me. Caitlin is my sister in-law/Sue's daughter. I do not know Evelyn well. I did not know she wrote poetry. But Sue said they had all been amazed by how well Evelyn was able to capture me in words. They couldn't wait to hear what I thought.
I couldn't wait to read it. We had parked in a gravel driveway. The rest of the family, including Caitlin's friend, was inside. I asked if I could read the poem before we entered. I would have asked the same had it not been a dream. She handed me the sheet.
"Ned is..." it began. As I read, I was awestruck, astounded, amazed. Never had I been so well defined. It was like my lifelong search for identity was finally over. My deepest essence, scripted in beautiful bubble letters, had been masterfully refined to fit on a half sheet of paper. It was a miracle.
It was also at this point that my sleep slipped to doze. I reread Evelyn's poem. My poem. I re-reread it. I remember reading it multiple times. This was a dream, I told myself. But of course it was more than a dream. God was speaking to me. He was using this dream to answer my questions. The questions we all have. The two deepest ones: who am I? why am I here?
And I was really coming into wakefulness now. And as it came the words were fading. Like the delete button pressing down. But I managed to find a pen before the first phrase was erased. I found an index card. I wrote down the words. Grateful, I fell back to sleep.
The next morning, I awoke to read this:
Ned is finger lickin' gum shoes.
Posted by Ned Erickson at 11:29 AM 2 comments:

Email ThisBlogThis!Share to TwitterShare to FacebookShare to Pinterest
Labels: dreams

Good Times in the Yadkin Valley 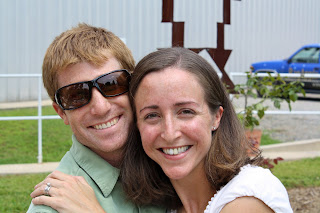 The last month, instead of traditional going-out-to-dinner dates, Lia and I have been going on afternoon excursions. It's a great perk that this current season of life provides us. As I think about it, we are very fortunate. Maybe its this out-of-the-ordinary-ness that's caused us to wait nearly three years before fully taking advantage of it. I don't know, but I'm glad we finally have. In fact, we've had so much fun, we've gotten downright evangelical about it. 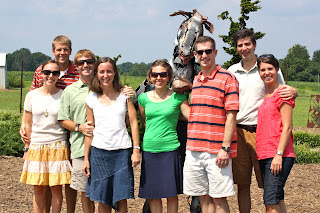 It was in this spread the joy spirit that we invited Derik and Bree Briggs, Tim and Lindsay Musser, and Paul and Stefanie Rudnicke to go on a mini wine tour last weekend. Jonathan Murfee was kind to let me borrow the Young Life van. (Unfortunately he and Allison had prior engagements so they could not come.) So just the eight of us piled in and headed into beautiful Yadkin Valley. We visited Rag Apple Lassie, which Lia and I had been to before and liked. (http://www.ragapplelassie.com/) The picture above is with their steel cow. (The vineyard is named after the owner's 4-H winning heifer.) 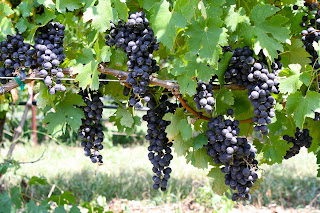 Hanover Park Winery was the surprise. (http://www.hanoverparkwines.com/) It is on the smaller side, but it has charm. The main building is an 1897 farm house. We entered and were ushered directly to the back room for a private tasting. The whole time I was waiting for the real group to show up. (We had not reserved a private tasting.) But we went with it. A minute in, this guy in a safari get up comes sauntering in. Grape juice stains on his Columbia shirt. His name is Michael and he happens to be the owner and winemaker. He spends the next thirty minutes telling us his life story. It was truly amazing. And the wine was good. Even better with the experience.
And so, the morals of the story: afternoon dating is good, driving around Yadkin Valley in a party van with a bunch of your friends is good, and pretending you are someone else in order to get the deluxe treatment is also good.
Posted by Ned Erickson at 4:53 AM 1 comment: 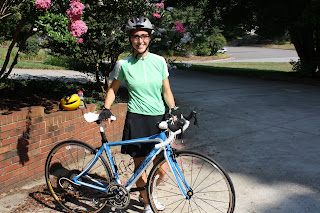 So Lia's big birthday present this year is a road bike. She doesn't usually get this big of a present, but she's been especially good this year, and since having baby number two, she has set her sights on becoming a triathlete. So she needs gear. And she already has the running shoes, the bathing suit (albeit not one of those newfangled ones that are now illegal), all she needs is a bike.
I don't know much about bikes. If you have been reading the blog, you may remember not so long ago I went on a bike ride on my bike. My is a term I use loosely. It is not exactly mine; it was loaned to me without a specific date to return. It's a 1980something blue wonder with a frame that will outlive me and components that a bike mechanic might put on their worst enemy's ride. I'm not complaining. I got it for free. I was loaned it for free. And it gets me from point A to point B. Not to mention it gives me the extra muscle and cardiovascular work out as bonus. It's like the shock boost they put in your Smoothie.
So I've been learning up on bikes, now that I am buying one. I've got a couple friends that race them. I have a father-in-law that lived on one a couple summer's ago. I've been compiling info. So last thursday Lia and I head to the shop with my limited arsenal of what I'm after. We land on a Cannondale Synapse with an aluminum frame, 105 Shimano components, Shimano wheels, blah, blah, min-ah-min-ah. They are going to have to order it, but that's ok. Lia's birthday is not for a week.
Now, I'm not sure if this has all been planned or not. The whole experience was a bit jedi mind tricky. But they happened to have the same bike in carbon, with SRAM components blah, blah, min-ah-min-ah... And under the guise of "sizing it out" they put Lia on it. She takes it for a ride. I had brought "my" blue wonder with me so I went along. I have to admit she and it looked good. They get the measurements they need. We say thanks. And just as we turn to leave, the guy says, "To save us the leg work, we'll knock $600 off the carbon bike." Lia and I look at each other. We ask them for permission to sleep on it.
I go home and stay up all night researching Cannondale Synapses. From what I can gather, it is a good deal. Still, I don't know. It's more than we planned to pay and nicer than we probably need. Finally, my friend Matt calls back. I had left a message earlier. I explain to him my dilemma. We go back and forth and so on until Matt says what I need to hear. He says, "Ned, you are Homer Simpson giving Marge a bowling ball for her birthday. It's for Marge, right? So what if the holes just so happen to fit your fingers. The bottom line is you are buying yourself a bike for Lia's birthday." Exactly. Decision made.
The next day, I got, I mean Lia got her Cannondale Synapse carbon fiber, jet propulsion, lightning racer.... what a birthday! Thanks Matt.
Posted by Ned Erickson at 11:59 AM No comments: