Lia and I had the distinct privilege of being present for Mission Emanuel's 20th anniversary celebration in Cielo on October 19.

There were many highlights.

One being the facility. A few short months ago, I was part of the cement bucket brigade. This time around I was in a first class facility! Check out these before after March/October photos: 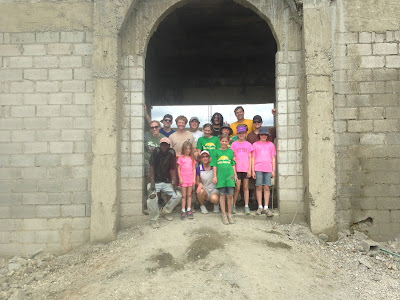 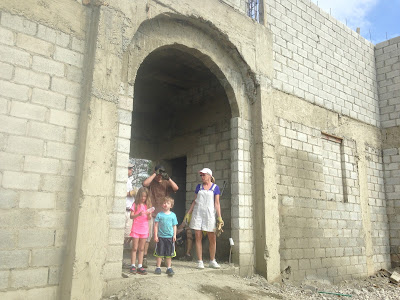 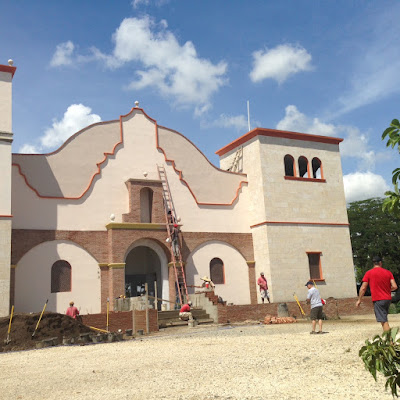 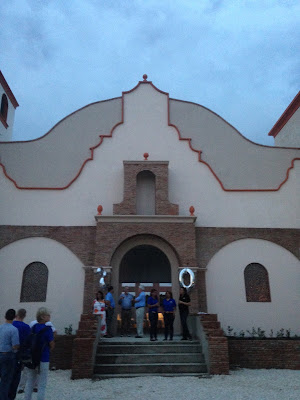 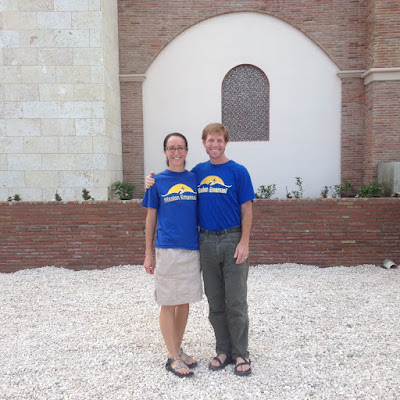 The second highlight was watching the DR students and staff in action. They planned, produced, and performed the whole evening with professionalism and panache to perfection. Lots of P's there. 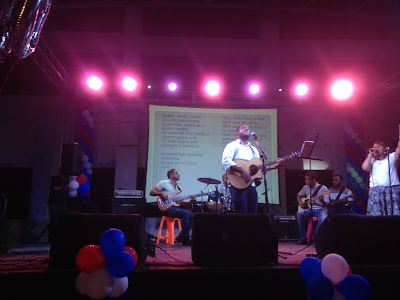 The third highlight was watching beautiful Lia take the stage. When I first met her, she would not have been caught dead standing in front of 250 folks - I don't care what nationality. She now speaks with a passionate calm that both captivates and inspires. What an honor to be married to such a woman! 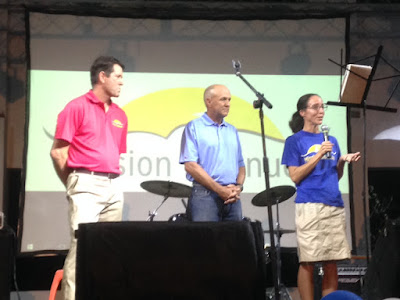 The fourth highlight was the tearful embrace she received afterward from Dr. Sarah, the DR Dr. that Lia has worked alongside the last couple years. These pictures do better than my words will - so I'll leave it to pictures. 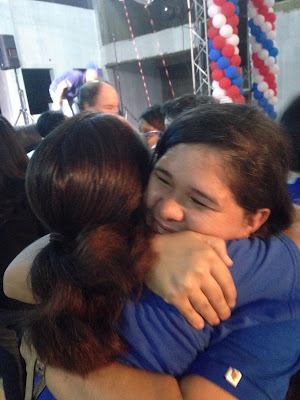 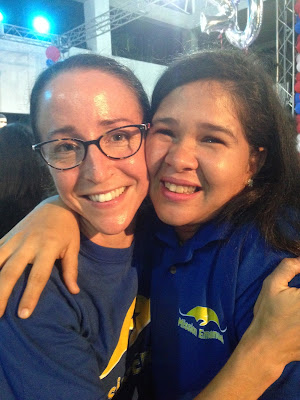 Posted by Ned Erickson at 12:44 PM No comments: 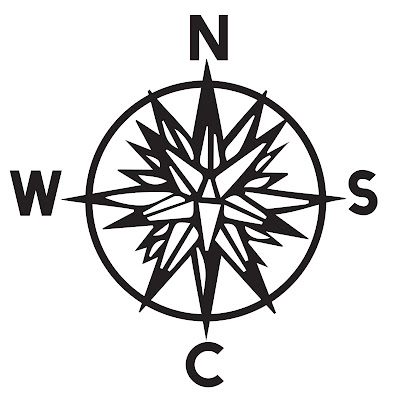 Friends, I am thrilled to announce to you that I am embarking on a new adventure. I have recently accepted the role of Founding Director of the Winston-Salem Fellows Program.

What is the Winston-Salem Fellows?

The Winston-Salem Fellows Program is an intensely practical ten-month experience designed to help recent college grads successfully bridge the transition from college to career by preparing them to live seamless lives of faith.

We are now recruiting for our 2016-2017 Class. If you or you know someone who might be interested, learn more at Winston-Salem Fellows.

This really is an exciting time in my life. Rarely have I felt more "made for something."

The Fellows provides me the opportunity to coach, connect, inspire, motivate and dream big while making tangible impacts.

Please get in touch with me if you want to know more.

There are opportunities to volunteer, network and donate! So come on! Join the adventure!

Posted by Ned Erickson at 9:25 AM No comments:

Eight years ago, Mitzi White’s life came unglued. She had been overweight as a child, battled weight for years; but after her boyfriend left her for another person two doors down – she lost the will to fight.

When she was invited to be a part of ABC’s reality show, Extreme Weight Loss, she weighed 262 pounds. (By the way, I learned she didn’t intend to sign up for the show. She had gone to auditions to support a friend and while she was there the producers convinced her to do the paperwork). 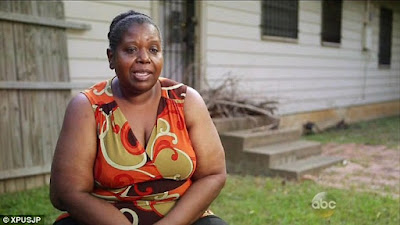 But in some ways that was the least of her problems. She was depressed, ashamed, and what we eventually learn on the show is that she had become a hoarder. When the producers interview her at the beginning of the program, she refuses to let them inside her house.

Heidi Powell, one of the coaches and hosts of Extreme Weight Loss, insisted on helping Mitzi pack for her trip. Again, Mitzi refused.

Heidi said: “If you are not ready to open up your self and your life to me. I can’t help you. So what’s it going to be? Are you going to let me in, or am I going to go?”

So Mitzi does it. She let’s her in. And it’s bad. There’s trash to the ceiling. These little tunnels she can walk through from room to room.

Heidi said: “When Mitzi opened up her door. I can’t believe any one can live that way. ‘Oh my goodness. Ok’ I had no idea it was as bad as it was…You own all this stuff – but really all this stuff owns you. If you want to take the next step and truly rid yourself of all of this weight, you found the right person. We can do this.”

Mitzi said:“It feels good that there is no judgment. And that she didn’t take the opportunity away from me.”

Later in the show, Mitzi had now lost 65 pounds and it was time to deal with her house. They had signed up Dr, Tolin, a clinical psychologist and hoarding specialist, to help her.

Mitzi was ready to tackle the problem – but instead of going inside and getting to work – Dr. Tolin took Mitzi to the backyard, which was full of twenty or so of her friends and coworkers – the friends she hadn’t let in for eight years.

Little did Mitzi know that the psychologist had brought her friends here for another reason.

“Why are we in the back of your house and not the front of it?” asked the psychologist.

“Because there is more to my story,” said Mitzi. And Mitzi let her friends know about her struggle, “In order to push people away – I started hoarding things…and it became like a physical barrier, just like my weight has been.”

“It doesn’t matter what your house looks like!” said one friend.
“We love you and your heart!” said another.
“We all have baggage!” said a third.

The psychologist then brought up the idea of letting her friends clean up the house.

“They are your friends,” said Dr. Tolin.

Mitzi whispered, “Why did you do this, Dr.?”

“We love you Mitzi,” said a friend.

Then, Dr. Tolin said something that struck me to the core. He said:

“What’s more important to you right now? Keeping your secrets or letting your friends in?”

I have a friend named Mike. I really look up to him. He is the kind of man I want to be. He’s handy. He’s resourceful. And he is an amazing husband and father. Years ago, I was dealing with some serious shame, and I knew that if I wanted Mike to be the friend he wanted to be to me, I was going to need to let him in.

I was going to have to tell him my secret.

And I was scared.

So I planned out a time for us to talk. We would be outside, on a run. If things went sour, I could just keep going – run away and never look back.

He pulled up. Got out of the car. We started walking. And I started talking.

I told him everything.

It was a most healing moment.

Mitzi had one too. She let her friends in, and everything changed. 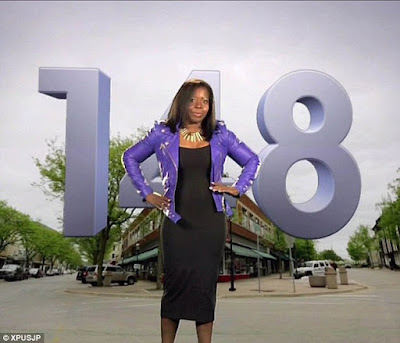 Mitzi is speaking in November at a Faith and Fitness Conference in Tampa, Florida

Mitzi said this about her experience: “I feel like the most difficult part of my transformation journey has been the vulnerability. And just truly understanding that in order for me to really move past where I’m at, the comfort level where I’m in. There’s actually a quote that says that life begins where your comfort zone ends. It could never be more true. And even though it’s very uncomfortable to be in a physically unfit body, to live with disease and with pain – there’s comfort in that, cause it’s what you know. But once you get beyond that and allow yourself to truly live – there’s nothing sweeter. The best part of my journey was becoming uncomfortable, was letting myself be vulnerable, showing my transparency, and allowing others to help me.”

Did you notice that?

Vulnerability was the hardest AND the best part.

It is true friends.
The question you need to answer is this:

What’s more important to you? Keeping your secrets or letting your friends in?

Posted by Ned Erickson at 9:07 AM No comments: