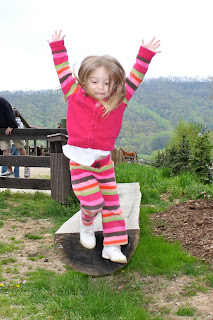 Every once and awhile Anna Rose looks up at me and asks: "Daddy, can I live at Windy Gap?" I confess there is part of me that wonders why she wouldn't rather live with us, but there is another part of me that is glad she loves the place. It is a place Lia and I love as well. As corny as it sounds, we feel closer to God there. And to think that Anna Rose would choose a place that feels, even if it isn't true, closer to God, honestly warms my heart. 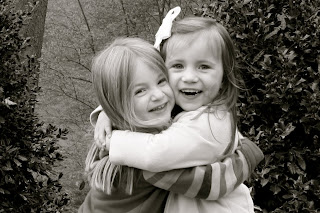 So last weekend we lived there. It was our local area's family camp. I had the privilege of leading music once again. I had great help this year from Chris Hinson, Ben Lambeth, and Jennifer Steele. We again decided to lead in costume. Jennifer Steele took it to the next level though I believe that Ben Lambeth dressed as Buzz Lightyear truly took the cake. (It was Disney theme...Toy Story might have been when Pixar was only Pixar, but we let him slide.) Blake Hill, Mark and Ginny Evans did a great job on program. Mark's Boris character...the Russian Figure Blader...was one of the most impressive displays of talent I have ever witnessed. Below is a great photo by Lia of Jimmy Glacier and Jimmy Riptide the Extreme Freaks of Nature... 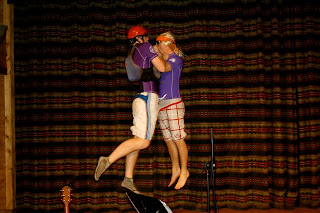 My college housemate Andy Morris, his wife Laura and their two cute dudes Luke and Gabriel came up on Saturday to visit. (I forgot to take pictures...erg) Saturday night, Lia and I had a hoot with Charley Patten, Kathy, their children Laura and Sarah and their husbands John Reed and Jim. I love that I just wrote the word hoot. Below, David is having a hoot at lunch. 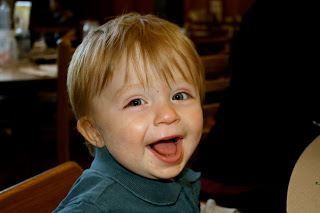 There were many highlights from the weekend. If I had to pick one, it would be Sunday morning, watching my little Anna Rose and her friends Hannah, Sarah Kent, and Ellie dancing to the music. This picture doesn't capture their or my joy. (By the way, yes, I am wearing footie pajamas. And yes, there is approximately two gallons of sweat sloshing around my feet.) 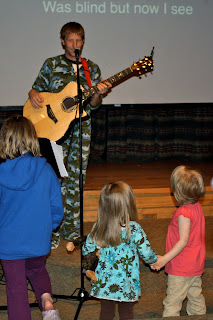 Come with us next year!
Posted by Ned Erickson at 10:15 AM No comments: 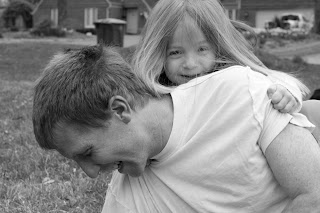 I had the chance to talk at church on Sunday.
Here's the link! (the passage was Luke 24:13-32)
http://www.hopepresws.com/components/com_sermonspeaker/media/20100411.mp3
this here below is the story about my Grandma...pasted from my notes

· Grandma...one of the saints…you won’t read anything about her, though I try to write about her whenever I have the chance…not that she was perfect…she suffered greatly, was tragically flawed, obsessively compulsively disordered…but she loved Jesus, and she knew he loved her…One time, she was under a great deal of pressure…so of course she started cleaning the house…at one point she began to clean underneath the piano…we actually inherited the piano, and I can tell you it has not been cleaned since…but there she was on her hands and knees cleaning underneath the piano, crying out to God…when all of the sudden she said that she saw this picture…she was in this pit…this miry pit…she couldn’t get out, the walls were too high, wet…the only light came from the small hole at the top of the pit…where she saw a shadow, a silhouette of a person, a hand reaching down…she grabbed it, he pulled her out, it was Jesus, he set her feet down on a rock…you may recognize this picture from Psalm 40…but as her eyes adjusted she looked out, and all around were brambles, the world was brambles, 360 degrees as far as the eye could see…thorns…and she couldn’t remember if she actually said the words or just thought them, but she said “what’s the point in pulling me out of the pit, if the whole world is brambles…there’s no path…” It was then that she heard Jesus say: “You are right. There is no path. I am the Path.” And he took her arms and wrapped them around his waist, he showed her how tightly she needed to hold on, then he stepped out, directly on the thorns, crushed them, blood, he took another step, directly on the thorns, and he turned to my grandmother and said, place your feet where I have placed mine…she said, he showed me how tightly I needed to hold onto him… 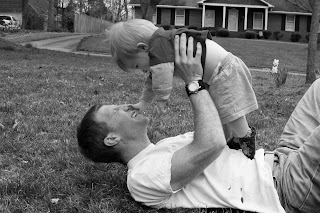 (the pictures are just because they are beautiful...taken by Lia) 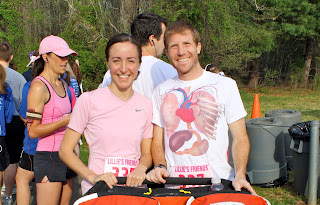 Last weekend, Lia, Anna Rose, David and I competed in our first 5k as a family. I'm proud to say that we came in first place (in the stroller division, of which there wasn't one). But still, we rolled across the finish line before the other strollers. You have to admit that's pretty impressive. As you can see by the picture below, Anna Rose and David (even Lia) were not as enthused as I was. But hey...who gives a rip about attitude...it's winning that matters (even if it means you have to make up your own division to do it!). 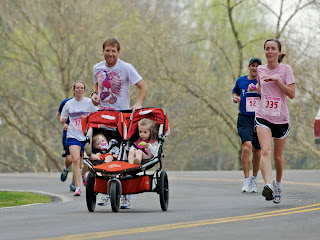 So anyway, it was a great event for a sweet little girl who passed away a few years ago from neuroblastoma. You may recall that we have very dear friends who have a daughter who is a neuroblastoma survivor (Kerith is the girl on the right in the picture below), Lia is her doctor, so you can imagine how this is an important event for us. 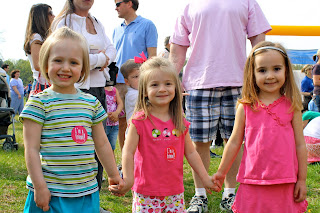 It was also a lot of fun. They had jumpy castles, face painting, crafts and a race for the kids...Anna Rose took it very seriously (see picture). 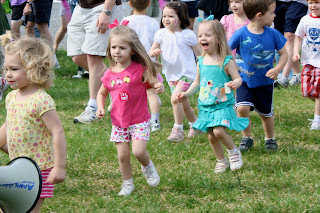 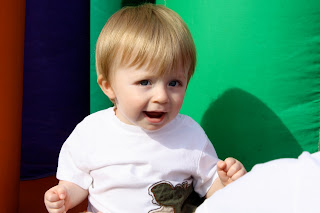 There was also an Easter Egg Hunt (which could have also been called something like 'A Parent's Worst Nightmare' or 'Utter Mass Chaos). The lady said go! and Anna Rose took off. 30 seconds later, I realized that most every other kid was being accompanied by a parent and Anna Rose had been swallowed up in the crowd! So as it turned out, it was not an Easter egg hunt, it was an Anna Rose hunt. Fortunately, I found her; several other parents did not (for the next fifteen minutes, the lady on the loudspeaker was announcing names of missing kids). Anna Rose found 5 eggs. 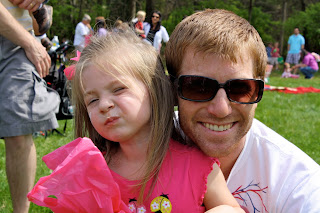 By the way, yes, I was wearing a shirt showing my insides...long story...
Posted by Ned Erickson at 10:50 AM 2 comments: