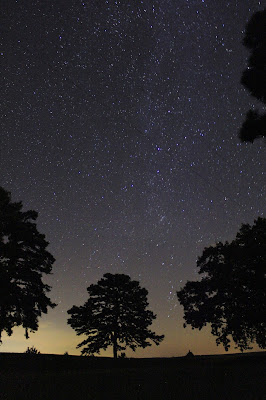 Last Wednesday, Lia and I set our alarm for 3:45am so that we could see the Perseid meteor shower. As it happened we were in the mountains and it being a new moon, the conditions were about as perfect as they possibly could be for gazing upon shooting stars.

We had learned earlier that day on NPR that meteors, at least the ones that appear as shooting stars on nights like the one we were about to witness, were only the size of sand. Can you believe it? Something that small shooting off something so magnificent?

For whatever reason the thought reminded me of Jesus when he described how faith like a mustard seed could move mountains, and how he calls us the light of the world. To think that mustard size faith could shine off something as spectacular as what Lia and I saw that night. Wow! Maybe Jesus was right...

I have to say there was one thing that bugged me. Now, it's hard to admit that I was bugged because we saw at least one shooting star a minute for a solid hour, but there was one thing that bugged me, and this is what it was: for that entire hour, not one of the shooting stars was anywhere close to the constellation Perseus. I mean, it's called the Perseid meteor shower for heaven sake! It bugged me I tell you.

It didn't bug Lia one bit, and eventually my whining or perhaps the cold got the best of her and she made her way back to bed. So it was just me, the great big sky, and the mustard seed size meteors for awhile - and eventually, as Ned is prone to do when he is staring up at the great big sky at night by himself, I started to think about how small I was and how big God is. The thought making me anxious and awestruck.

I was getting cold. I pulled the blanket tight around me as I stood up out of my plastic Adirondack chair. And rising to full height, I sang the words I like to sing in moments like these: "Praise God to whom all blessings flow…" And as I finished the Doxology and sang "Amen," wouldn't you know it, the greatest, biggest meteor of the night goes shooting across the constellation of Perseus like an underline.

It was just like the Lord was saying, "Take that!" Ha! No. It was more like he was whispering, "That was just for you."

Posted by Ned Erickson at 12:17 PM No comments: