A few weeks ago, I wrote about my large posterior. Well, I will never complain about it again. You see, it saved my little girl's life last week...at least my genes did...
We were in the mountains with our friends the Harrises. It had "snowed" in Winston, but Sparta had gotten 3-5 inches, still hardly anything in the mind of this ex-northerner, but hey, you take what you can get. Anyway, I've been eyeing some hills and I convinced some friends to try them with me.
It was a warm day. By the time we got our snowpants on, grass was already starting to poke through. But these hills were pretty epic. Miniature ski runs...not so miniature actually.... Barnes and I took turns riding with the kids down. Little Barnes finally convinced us to give him a turn, which ended with a smooshed briar patch, tears and a bloody lip.
Not to be outdone, Anna Rose wanted to go it alone. So I ran down the hill to catch her before she careened into the aforementioned briar patch. Elizabeth was up top. The next thing I see is Anna Rose shooting off like a bullet - the wrong direction!
I yell/tell her to jump off. But there's no chance. She has no understanding that bailing out on a run is sometimes the smartest thing to do. She's holding on for dear life. So I take off after her. But there's no getting to her in time. She's flying straight for the woods...fast...
It's then I see, out of the corner of my eye, the gigantic log she is going to hit. "Jump!" I scream. No chance. The sled slams into the log. Anna Rose flies. I mean SOARS in the air. Full air cartwheel head over feet, feet over head, flip-a-doozie-land-in-a-heap like a ragdoll. I was sure something, maybe a lot of things, were broken.
She's crying. She swears that she will never sled again as long as she lives. (I might not let her!) I make sure she can feel her toes, her fingers. I check her arms, legs, nothing seems broken. It's a miracle. Then I realize, no, it's her big-old-Erickson-booty! By the grace of God that's what she landed on!
She was a little stiff the rest of the day. But after lunch we were able to make a snowman together.
Then the kiddos took a well-earned nap-to-a-movie in the basement. 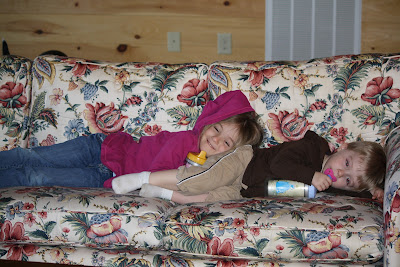 The next day, she was back to her running, jumping, full of life self. Thank God for big tushies. Not to mention the fact that my girl is one stinking amazing tough young lady.

Please Read this and help out my friend! It takes 10 seconds, and the house is cool.

As some of you already know, my folks own a historic property in downtown Fayetteville called Stone Manor. It was built/designed with some of the same folks who built/designed the Biltmore and is from that same era. They have recently entered the property into a competition to have it appear on This Old House. We are all excited about the potential there. In order to be selected for the program people have to vote on the best property out of many entries. This process goes on for several weeks online (they have not provided us with the end date). It would be hugely helpful if you could click on the link below (whenever you think of it- as many times as you would like- there is no limit per voter of entries submitted) slide the bar to 100% and select submit. It is a process we have to continue to do until they close the competition. I will make sure to email and facebook everyone when it is over and let you know what the result is when we hear back.
Thanks so much for your help- it means alot!
http://youroldhouse.thisoldhouse.com/thisoldhouse/submission.jsp?id=119843
All the Best,
Caroline Tyson Cox
Posted by Ned Erickson at 2:53 PM No comments: 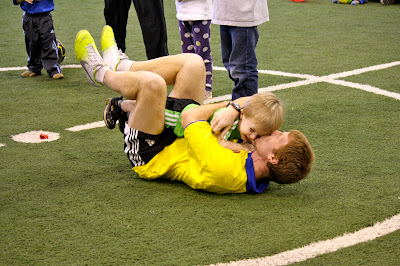 A lot of things had to come together last weekend. Without getting into many of the details - we had a house that needed to get unfurnished - a house to then refurnish - Lia's family to entertain - a missionary friend to host - and a party to pull off...it doesn't sound like much...but trust me...it was.

And somehow, it all went perfectly. Our buddy in Sparta called me a 1 p.m. saying the house was empty just as Crick and I were finishing loading the Uhaul in my driveway. The house went unfurnished a whole two hours. By that night, we were sitting in our new home. It was a miracle. 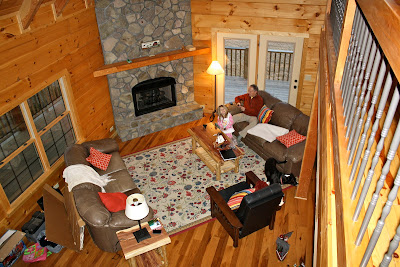 The next morning, Ben Luthy, our new Amish friend, arrived with two of his children - Charity, a beautiful thirteen year who is strong as an ox; and Adam, a five year old who instantly hit it off with our children. Ben is a furniture builder. His work is of the highest quality and his prices or more than reasonable. They're unreasonable, in fact. But that is the beauty of the man. His craftmanship and his professionalism are the way I imagine Jesus' were back at his carpentry shop in Nazareth. Ben Luthy reminds me of Jesus. All the way down to the beard.

Here is the bunk bed (it was the only thing Anna Rose asked for) and the full bed he built for us: 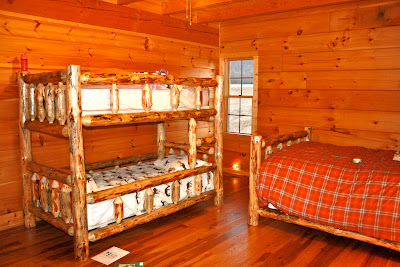 Here is the master bed, trunk, and side table: 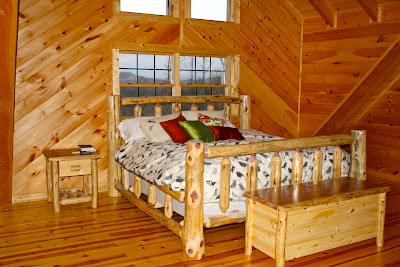 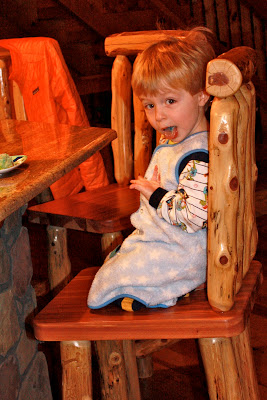 You get the picture.

The cabin is coming together great. We had a fabulous time with Lia's folks. And after a blustery night, we awoke to an incredible sunrise 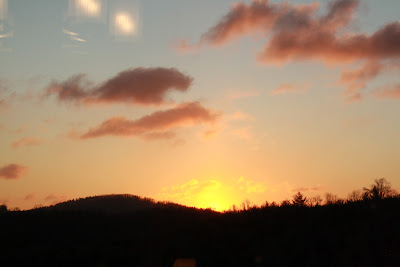 and were able to make it back to Winston-Salem in time to welcome Hunter Lambeth and his friend (now ours) Yousef. They have begun Young Life in Israel. Yousef and Young Life leaders like him have started a Palestinian Club of Cultural Christians, a Jewish Club, and even a Muslim Club. It's unbelievable to hear their stories. As we have seen in the Arab Spring - it really is the children who are the future and our best hope for peace. To think we have friends now walking alongside young men and women pointing them to the Prince of Peace...it's amazing...to think that Hunter will be stationed in Nazareth, that there will be Young Life in the town where Jesus was a teenager...now that's awesome.

Let me know if you want to join the movement financially, in prayer, or both. 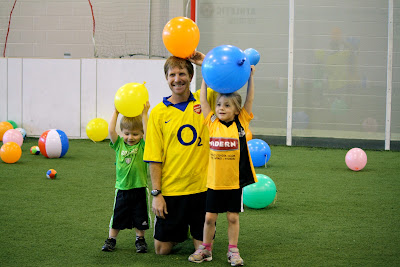 Afterward, we had lunch, and then I blitzed home to get ready for Dave Dave's birthday party. Lia had this great idea to celebrate it at the Winston-Salem Soccer Plex www.wssoccerplex.com (I'm like a writing commercial today!) And after blowing up 10 beach balls, 16 punch balls, and 72 balloons - celebrate we did. With all the balls, balloons, and soccer balls that we brought we had well over 100 things to kick. 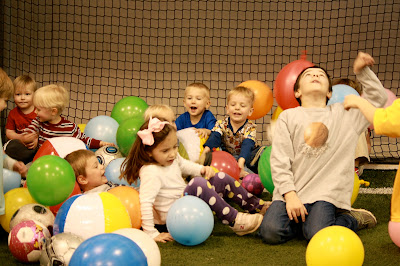 And somehow - no one got hurt. In fact, not a single tear was shed. 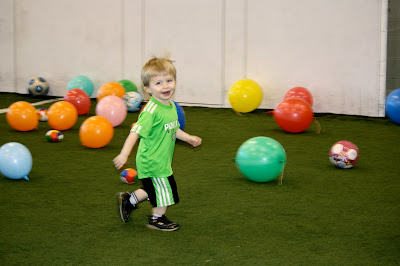 It was a miracle. And Dave Dave had a blast. 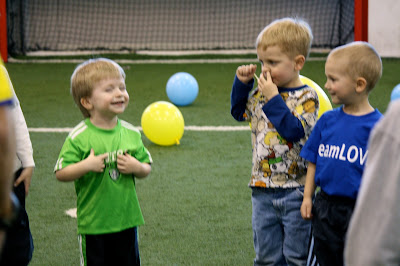 It was the perfect end to a perfect weekend... 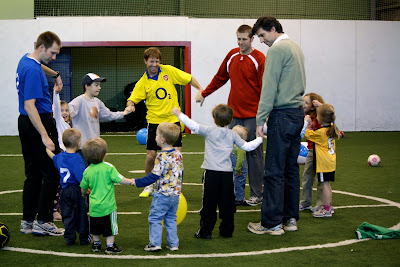 Which is exactly what I finished telling Lia thirty seconds before Dave Dave climbed the chair, tipped it over, and landed on the floor, chin first.

To use Anna Rose's words: "Blood exploded from his face."

Thus commenced our first trip to the Emergency Department as parents. Dave Dave received Versed and 4 stitches - done by our great friend Michael Mitchell, who came in just for the occasion. thanks Michael. 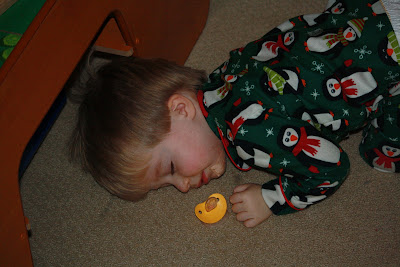 And thus, our perfect weekend ended on a down note. And now, Dave Dave has been initiated into that great fraternity of those who have had stitches on their chin.

Posted by Ned Erickson at 11:27 AM No comments:

For his birthday, Dave Dave asked for one thing: BLUE CAKE. 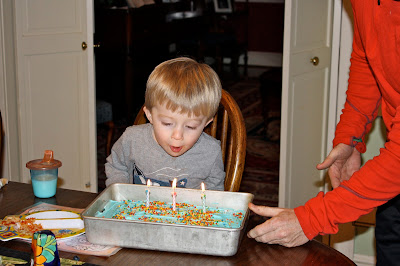 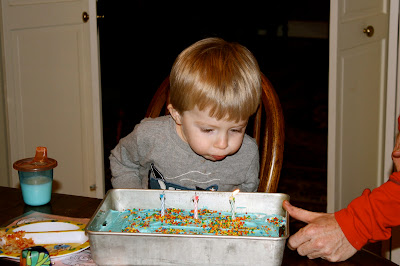 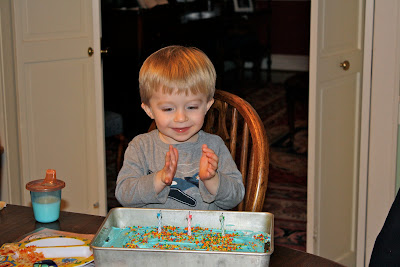 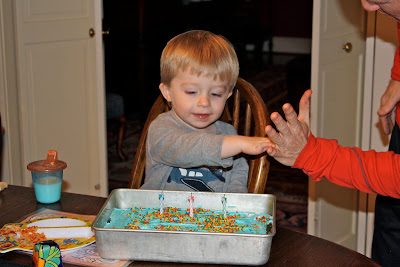 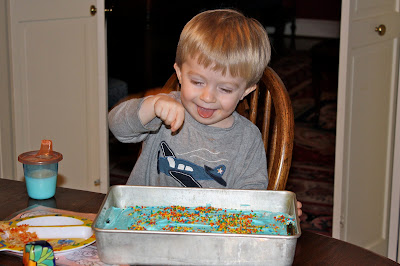 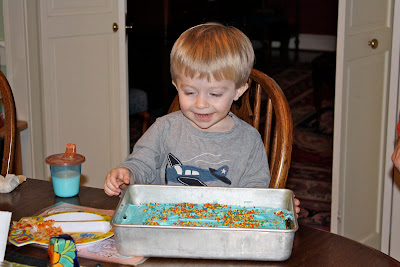 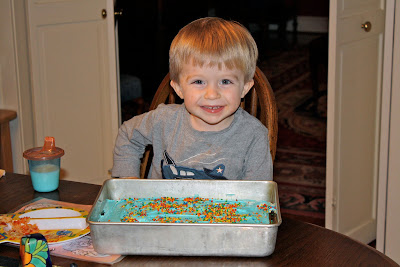 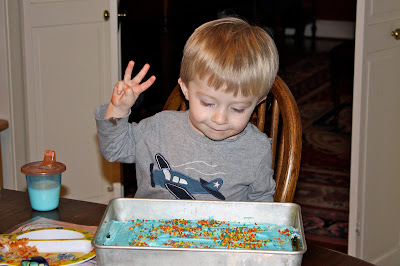 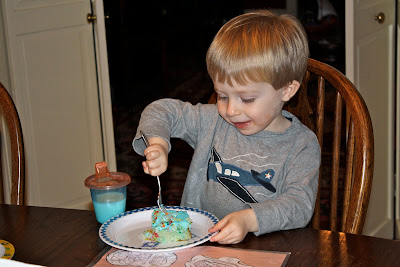 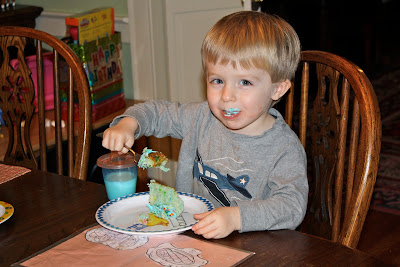 While it's true that you don't always get what you want...sometimes...you do.

Happy Birthday, Dave Dave. I love you...may your big 3 be the best year yet.
Posted by Ned Erickson at 6:49 AM No comments:

Lord of the Flies - the Girl Version 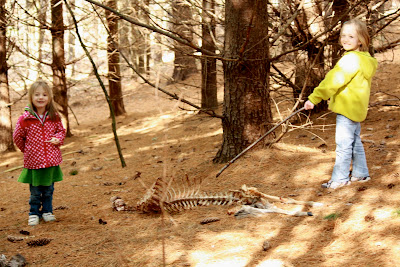 Yes, Hannah and Anna Rose are standing next to a deer carcass. They found it this weekend while we were  hike through the woods. They insisted that I take their picture with it.

Look at their faces: 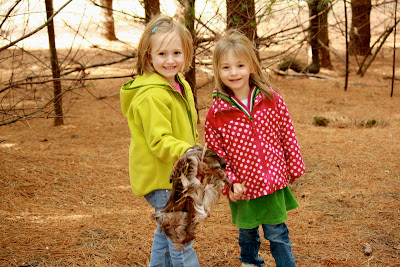 Have you ever seen prouder, happier children?

(btw. before you turn me into child protective services, they're holding it with a stick)