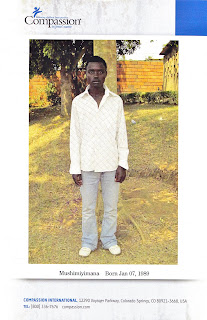 Ten years ago, me and some guys adopted a Compassion child. Really, it was me. It was my idea. And it was easier just paying for it, then hounding the guys for the cash every month. Our name was Ned and the Boyz. Every couple months I'd get a letter from our little fella. Each time addressed to Ned and the Boyz. I always got a chuckle at that.
For awhile there in the beginning, I would give the boyz updates on our fella. He was from Rwanda. He had a wild name: Mushimiyimana. Pretty wild. He never smiled in his picture.
Years went by. The boyz moved, including me. This summer we lost our leader Paul. Many of us got married. Many of us now have children of our own.
Every month I would send Compassion my check. Every couple months I'd get a letter from Mushimiyimana. I wrote back. Not every time. But enough to build a relationship. I keep him updated on the ups and downs of the writer's life. He tells me about what the Lord is teaching him. He keeps me updated on the local soccer news. He isn't the best student. I've sent him pictures of the family. I'd get a picture every year or so of him. He never smiled. But I didn't care that he wasn't photogenic. We were friends. Our letters were always full of love even if I had forgotten to write him back.
At some point Mushimiyimana started going by Eric. My last name is Erickson. He never told me if his name choice was coincidence or on purpose.
To my surprise, I got a letter from Compassion about a month ago, notifying me that Eric had aged out of the program. "Is he done?" I asked. A foolish question. Are any of us done? "Did he graduate?" "Not quite." (Like I said, he is not the greatest student.) But he can, and this May he will, Lord willing.
Yesterday, I wrote him my "Final Letter." It was pretty powerful so far as experiences go. I couldn't stop crying. And I couldn't find the words. I just didn't know how much this little guy I've never met has meant to me these last ten years.
He's a big guy now. Eric is 21. I'm proud of him. I believe great things are in store for him.
I didn't know if it was against the rules, but in my last letter I gave Eric my address, email, phone number. I wanted to give him everything. (I sent him a big check even.) I wanted him to know that this little tiny benevolence is not willing to stop even if Compassion tells him to.
I know that some Compassion donors plan a meeting with their child. I don't know if Mushimiyimana (Eric) and I will ever meet here on earth. But it has truly been an honor to be his benefactor these last ten years.
God bless you, Mushi...
...Last night, Ned and the family adopted a new child. Her name is Umazi. She is a little girl from Kenya, born three days after Anna Rose. So it begins again...
Posted by Ned Erickson at 4:39 PM No comments: 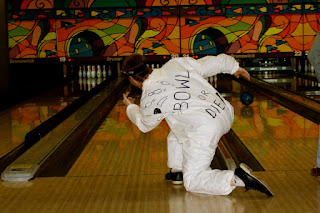 We had another successful Bowl-O-Rama. With the weather and the short notice, I was pleased with the great turn out (of course disappointed that some dear friends couldn't make it). A great time was had by all. In fact, there was one moment that was so funny, I literally fell to the floor in a veritable gut bust. I can't really expound on what happened. It would get lost in translation. And it would be terribly inappropriate. Jonathan Murfee was involved. (If you know Murf then it shouldn't surprise you (1) that it was funny (2) that it was inappropriate.) Let's change the subject... 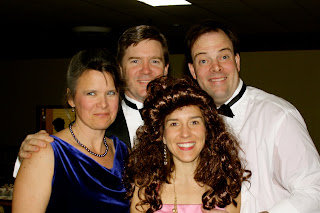 (JB, Dudley, Murfette and Murf in their finest) 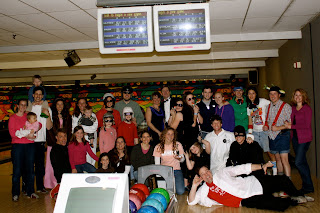 So the Bowl-O-Rama was awesome. We switched venues to Creekside Lanes this year because of price and service. The folks at Creekside were wonderful to work with. I could not have been more pleased with the level of enthusiasm and leeway they gave me as I put this event together. If you are bowling in the triad - bowl there. 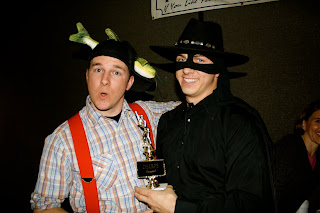 Team Zorro and Fish-head (Mark Evans and Ben Lambeth) came away with the Championship. The Bell family won the Spirit Award. David Erickson was the Master of Ceremonies. We also brought a cake for him (as it was three days before his birthday). 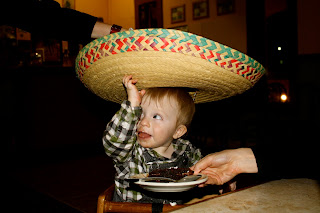 (Dave Dave being festive)
There was this little kid that was bowling beside us that asked me if he could play the next time we had the event. I said 'absolutely.'
Put it on the calendar, first Saturday of February 2011.
Posted by Ned Erickson at 10:31 AM 3 comments: